We had a good meeting Tuesday at the Richland Library. Glad to see everyone. I want to review the highlights of the meeting and emphasize some new activities coming up.
The FAA has issued the Interim Final Rule that all model aircraft must display the pilot’s FAA registration number.
Larry gave the treasurer’s report. The financial condition of the club is in good shape. We rolled over a CD for a higher interest rate we had been getting. Larry highlighted the importance of the fund raiser events we hold during the year. The fund raisers contribute about 35% of our total cash for the year. Without them, and participation by everyone who can, our financial situation would be quite different.
Jim updated us on some new web site enhancements.There is an area now where a member can post when he will be at the field flying. Other members can respond so all can get an idea of who will be flying. This is done by automated emails. To be included in this let Jim know you want your name and email added to the area.
Jim has also set up a history and newsletter section. However, we need editors for these areas. If you are interested in helping out in one of these let Jim or me know and we’ll get these areas active.
PayPal is now working for all dues payments.Thanks Jim for these enhancements!
Rob Skiba has volunteered to be Chief Instructor. He is starting a new training evening beginning in May. Each Tuesday, from may 7 through the end of September Rob and other instructors as available will be at the field from 5:00 PM until dark to instruct new pilots as well as hone additional skills you may want to work on.Let your friends and neighbors know of this opportunity to learn model aviation, fixed wing or rotary. Since it will be each week, you don’t have to hunt down an instructor, just show up. More detail will follow as the time nears.
Thank you, Rob, for setting up what will be an important new activity in the club!
Since this is a Tuesday evening, we will also have our club meetings at the field beginning in May.
Rob is also coordinating a jet event in September. Contact him if you would like to assist in making this a success.
We are planning a clean up day at the field March 23, with an alternate date of March 30 if weather is poor. More details will follow.
We host the IMAC event April 6 and 7. This is one of the fund raising opportunities Larry encouraged us to participate in. We will need members to help both days with food service preparation, scribing (score keeping working with judges), and clean up. Please consider how much time you can contribute in what area and let me know.
And April 20, there will be a dog agility run at the field. The field will be closed to flying Friday afternoon, April 19 and all day Saturday the 20th. Again, this is a fund raising event. We don’t have to provide manpower, but the field is closed.
Additional info will be coming out on each of these items, but I want you to know what is happening and being planned. Be thinking of how you can participate in the success of the TCRCM!
John

February 18, 2019
February 18, 2019
The February meeting will be Tuesday, February 19, at 7:00 PM, at Richland Public Library, Seminar Room.
That room is straight in the front doors, past the book check, past the public computers and in the “SteamSpace” (big sign over the doors)
Everyone can bring us up to date on your winter projects and plans for the year.
We will discuss the calendar and various events for the coming year.
The most immediate event will be a clean up day in mid to late March.
Looking forward to seeing all of you,
John
February 13, 2019

Today was, according to the local weather, to be a partly sunny day with a high of 51.  With that in mind a few of us headed to the field to do some long awaited flying.

We arrived at the field at around 10:30 to find a bit of fog with and outlook of clearing and becoming sunny.  Little did we know that Mother Nature had something else in mind.

John and I assembled our planes.  Weather still promising to change.  I got my Pulse XT fired up and on the runway.  Just as I took off, the wind changed to the north and the fog blew in.  Almost loosing site of the plane I was able to turn at the end of the runway and successfully make it back on the ground.  John got his plane fired up and headed to the runway.  Take off successful, but just as I experienced, the fog captured the sky.  He was able to negotiate a turn and back to the runway safely.

Bob made a successful short flight after some struggling with his radio and plane, George had a couple of great flights with his helicopter and Scott made it look easy, obviously the fog did not bother him at all during his two successful flights.  He did have a bit of a challenge with a new to him plane during the ground test.  Throttle up, plane moved backwards.  Back to the hanger for an adjustment.

Weather never changed, the wind and fog stayed, the temperatures hovered around 37 degrees, so the crew was done and complete early in the afternoon.

Pictures curtesy of Camille Page.  Thanks to all, and see you next time. 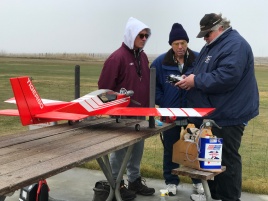 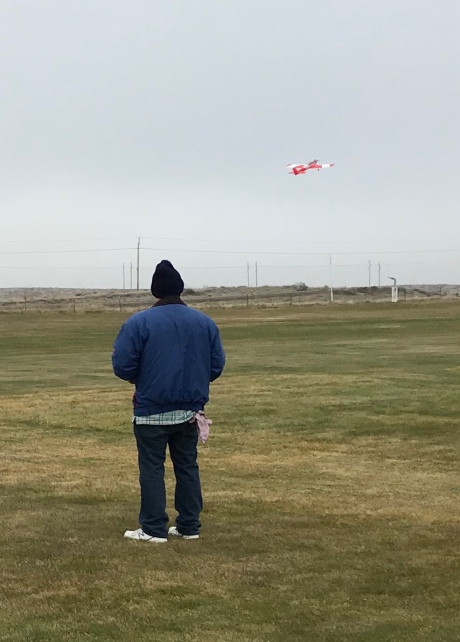 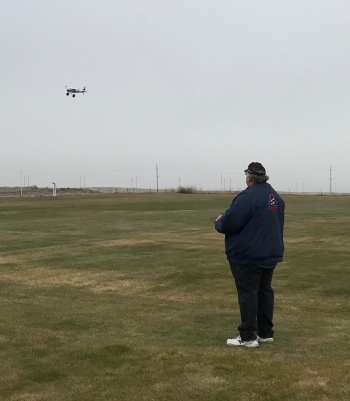